These disciplines are available at the club

Clay pigeon shooting, also known as clay target shooting, and formally known as Inanimate Bird Shooting, is the art of shooting a firearm at special flying targets, known as clay pigeons or clay targets. The terminology commonly used by clay shooters often relates to times past, when live-pigeon competitions were held. Although such competitions were made illegal in the UK in 1921, a target may still be called a “bird”, a hit may be referred to as a “kill”, and a missed target as a “bird away”; the machine which projects the targets is still known as a “trap”.

The English Sporting discipline has the sport’s biggest following. While the other disciplines only use standard targets, in Sporting almost anything goes. Targets are thrown in a great variety of trajectories, angles, speeds, elevations and distances and the discipline was originally devised to simulate live quarry shooting, hence some of the names commonly used on sporting stands: springing teal, driven pheasant, bolting rabbit, crossing pigeon, dropping duck, etc. Disciplines in this group include English sporting, international (FITASC) sporting, super sporting sportrap, and Compak sporting. This discipline can have an infinite variety of “stands”. English sporting is the most popular form of clay shooting in the UK, and a course or competition will feature a given number of stands each of which has a predetermined number of targets, all traveling along the same path and speed, either as singles or doubles. Each stand will feature a different type of target; e.g., crosser, driven, quartering, etc. International (FITASC) sporting gives a much greater variety of targets in terms of trajectory and speed, and is shot by squads of six competitors in rounds of 25 targets at a time. Super Sporting is a hybrid of the two preceding varieties. There are also other formats such as Compak sporting and sportap in which five cages are surrounded by a number of traps, and shooters fire a specific combinations or singles from each stand according to a program displayed in front of the cage. 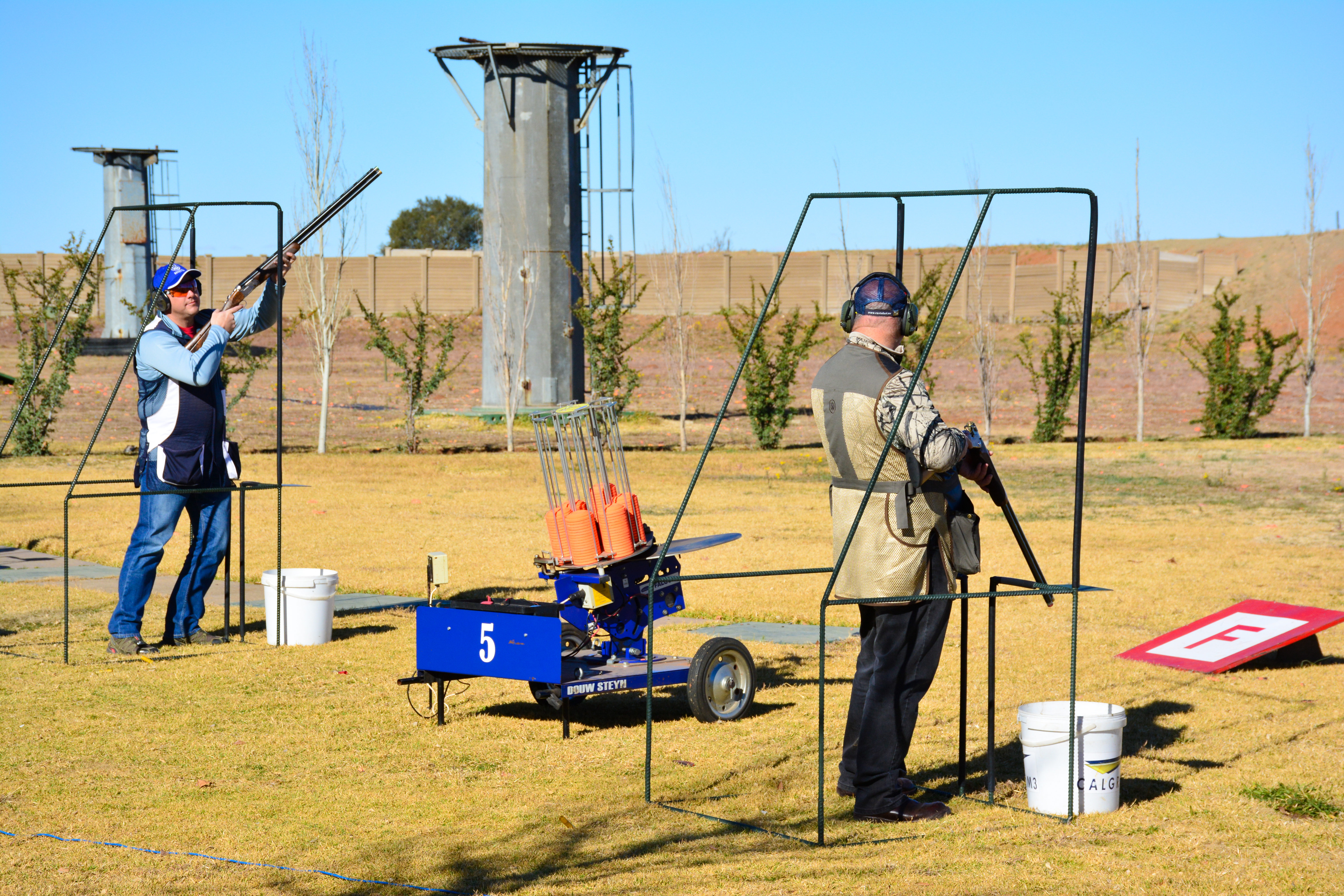 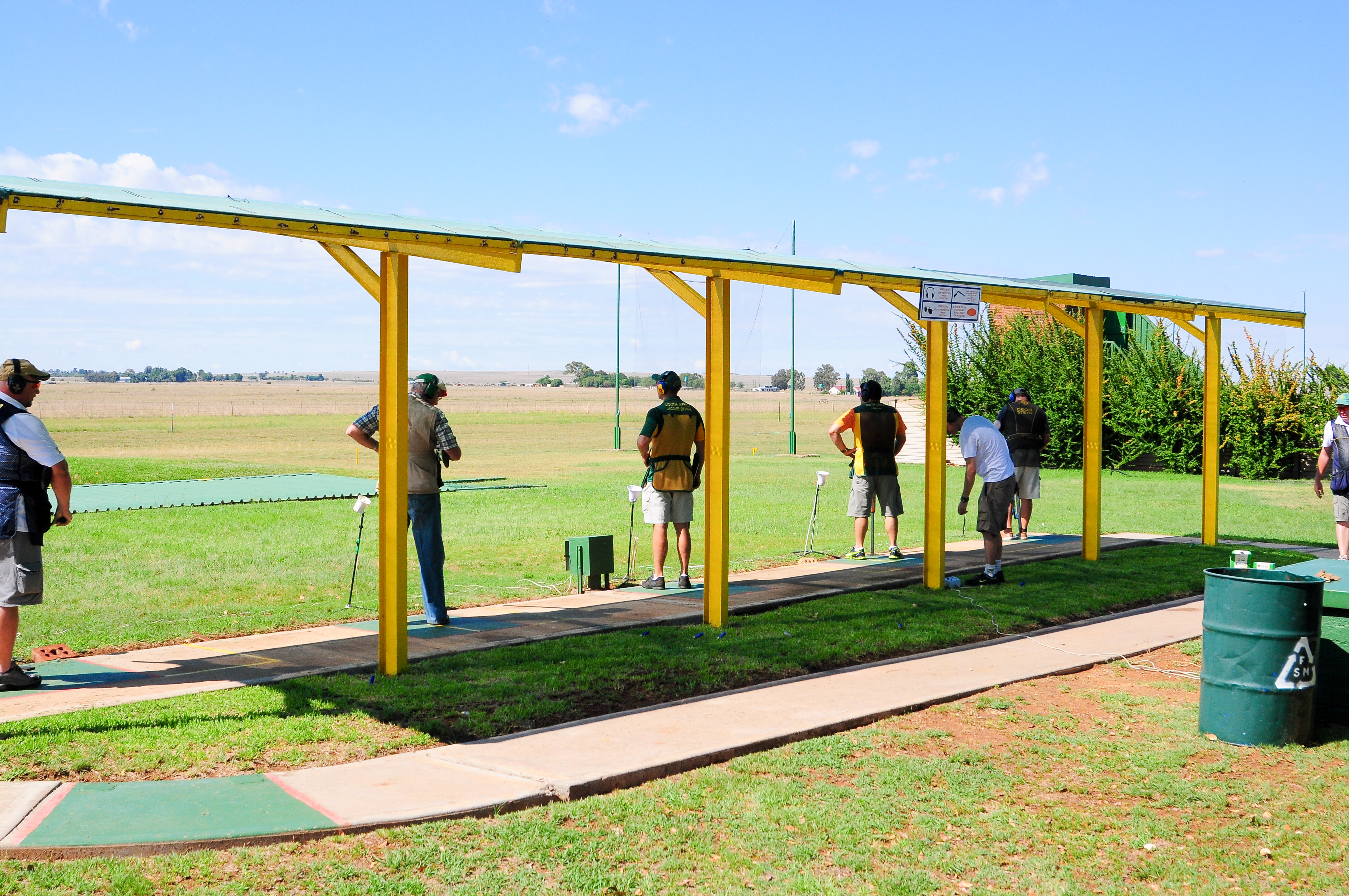 As its name indicates, this is one of the disciplines which form part of the shooting programme at the Olympic Games. A trench in front of the shooting stands conceals 15 traps arranged in five groups of three. Shooters take turns to shoot at a target each, before moving in a clockwise direction to the next stand in the line. Targets for each shooter are thrown immediately upon his call and are selected by a shooting scheme (program) that ensures all competitors receive exactly the same target selection, but in an unpredictable randomised order to the extent that there will be one straight, two left and two right targets for each stand from any one of the three traps directly in front of him/her; guessing which one is next is impossible unless the shooter is on his/her last five targets. Olympic trap targets are set to travel 76 metres (+/-1m) at the top of trench level marker peg, unless the terrain is dead flat, at varying elevations and with a maximum horizontal angle of 45 degrees either side of the centre line (being where the target exits the trench). Scoring is on the basis of one point per target killed, regardless of whether this is achieved with the first or with the second barrel unless it is a final where the top six scorers shoot off as a single barrel event, regardless of local club grades if any. A simpler and cheaper to install variation of this discipline is known as automatic ball trap (ABT) where only one trap is used and target variation is obtained by the continuous oscillation of the trap in both horizontal and vertical directions in order to give the same spread of targets as in Olympic trap. Similarly, the targets are also thrown to a maximum of 76 metres. Also known at Bunker Trap, and International Trap

Targets are thrown either as singles or doubles from one or more traps situated some 15 m in front of the shooter, and are generally going away from the firing point at varying speeds, angles and elevations. The most common disciplines in this group are:

Also known as DTL, this is a popular trap shooting discipline. Targets are thrown to a distance of 45 to 50 metres at a fixed height of approximately 2.75 m and with a horizontal spread of up to 22 degrees either side of the centre line. Each competitor shoots at a single target in turn, but without moving from the stand until all have shot five targets. Then they all move one place to the right and continue to do so until they have all completed a standard round of 25 birds. Scoring of each target is 3 points for a first barrel kill, 2 points for a second barrel kill and 0 for a miss (maximum 75 points per round). Variations of this discipline are single barrel, double rise, and handicap-by-distance.

A variation on the theme of trap shooting, sometimes known as five trap. Five traps are installed in a trench in front of the shooting stands, all set at different angles, elevations and speeds, and upon the call of “Pull!” by the shooter any one of the five machines, selected at random, will be released. Horizontal angles can vary from 0 degrees to 45 degrees either side of the centre line and target distance is between 60 and 70 metres. Elevations can vary, as in other trap disciplines (except DTL), between 1.5 and 3.5 metres above ground level. There are 10 different schemes available.

Skeet is a word of Scandinavian origin, though the discipline originated in America. Targets are thrown in singles and doubles from 2 trap houses situated some 40 metres apart, at opposite ends of a semicircular arc on which there are seven shooting positions. The targets are thrown at set trajectories and speeds. The main disciplines in this group are English skeet, Olympic skeet and American (NSSA) skeet. In NSSA discipline, targets are released in a combination of singles and doubles, adding up to a total of 25 targets per round, from the High and Low trap houses on a fixed trajectory and speed. Variety is achieved by shooting round the seven stations on the semicircle, followed by an eighth station, located between stations one and seven. Scoring is on the basis of 1 point per target killed, up to a maximum of 25. In English skeet (by far the most popular of the skeet disciplines), the gun position is optional (i.e., pre-mounted or out-of-shoulder when the target is called) and the targets are released immediately upon the shooter’s call. In Olympic skeet, the targets travel at a considerably faster speed, the release of the target can be delayed up to 3 seconds after calling and the gun-down position is compulsory. There is also an eighth shooting station, midway 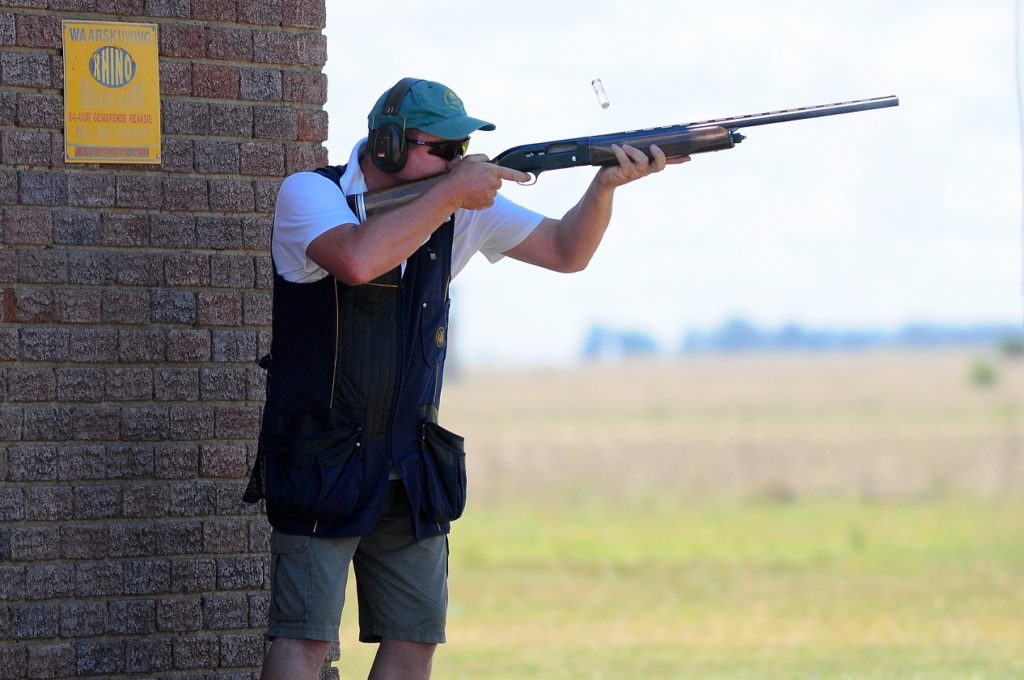